This is the second in the Walk in the Shoes series with Chief Administrator, Paul Sherfey, Presiding Judge, Laura Inveen and Communications Manager, Jamie Holter.

Judge Inveen, Paul Sherfey and I visited the Jury Room Monday, Oct. 22 at 7:30 am as jurors started to trickle in. Over the next hour, Jury Room Court Operations members Daisy Rios and Santiago Villanueva will check in more than 200 people using a barcoded postcard which doubles as a juror badge. 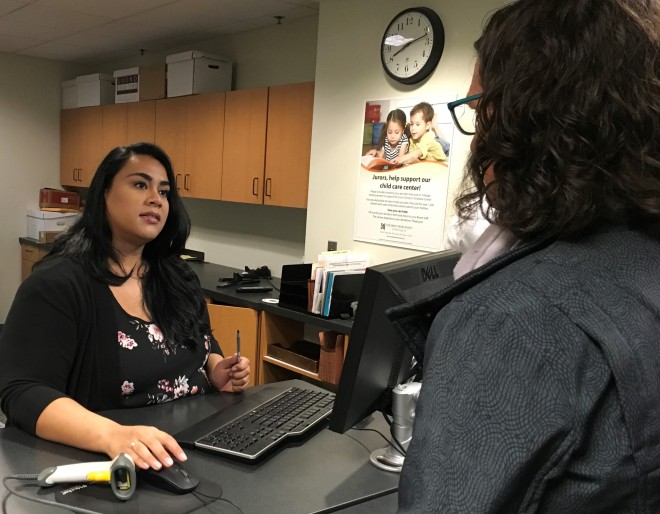 This jury pool will hear three civil trials, three criminal trials (in-custody criminal trials have priority as do trials with interpreters) and one District Court trial. Other trials are bench trials and juries are not involved.

Prospective jurors’ names come from voter registration, and/or Washington State as a state ID or a drivers’ license.

To be an eligible juror, you must be:

The “Jury Management System” generates random lists of jurors – like Powerball. It’s completely random. It’s a numbers game. Greg says that’s the most common question he gets. He can’t add or subtract names because he can’t see them until the process is over.

“If you are called five times and a co-worker is called once, that’s the nature of a random selection process.” Greg Wheeler, Jury Room Supervisor

Calibrating the pull, though, is art and science.

When a jury summons is sent, people respond “yes” 20 percent of the time – that means they agree to come in the first date they are given. Prospective jurors can also defer to a specific future date. All candidates are allowed to defer twice, up to a year each time.  This second group – when called on that future date – responds affirmatively 50 percent of the time. Greg balances those two sets of numbers to get this jury room filled. Jurors get an email reminding them of jury service a couple weeks in advance.

At 8:15 am, it’s movie time! A 15-minute video from the Washington State Administrative Office of the Courts explains the court process – the people, the terms, what will happen and the juror’s role in the case.

When that’s done, a second, eight-minute video introduced by King County Superior Court Judge Laura Inveen and District Court Judge Ketu Shah about bias plays. It’s a very good, straightforward video that explains how we all have bias, we must acknowledge it and work to decide cases based on facts – not gender, not skin color, and not socio-economic status. The prospective jurors are very attentive during this video.

When the videos are done, Greg thanks jurors for showing up today, explains how the day will flow: jurors get called (he apologizes in advance for butchering names), they go to a courtroom, they either get a case or are dismissed from that courtroom to return to the jury room to await the next call. He’s funny and self-deprecating. You can tell he does this all the time. 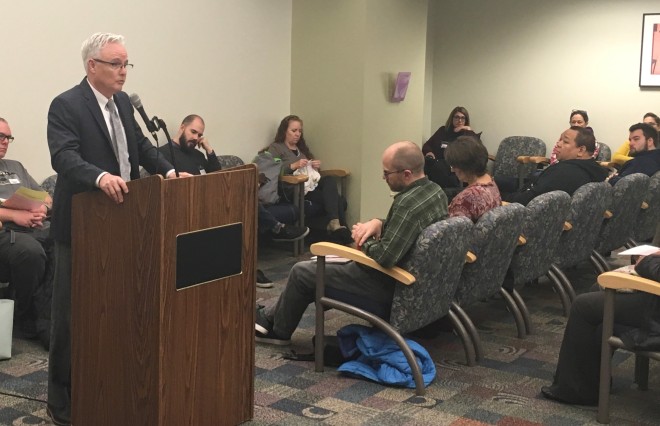 Jurors spend the next several hours going in and out of the jury room and using free Wi-Fi in the quiet room to get caught up on work while they wait. If jurors get to 4:30 and aren’t selected, they go home. One day, one shot at a trial.

“This one-day-one-trial approach is only a few months old and considered a best practice approach to jury management. Jurors appreciate that we value their time.” Greg Wheeler

Greg says 100 percent of empaneled jurors he has spoken with enjoy the experience. They feel good about doing their civic duty and usually learn something about the justice system. He reminds us that jury service is the ONLY obligation you have as a citizen.

By 3 pm, all but eight jurors have been called at least once – mostly thanks to a 65-juror request from Judge North. Greg puts “8” on his spreadsheet – the number of jurors who didn’t get called today – compares it to Oct. 22, 2017 to see how close he got. Then he moves on to purging names from the basket of “No Longer at This Address” postcards that just came in.

This entire process is repeated Monday, Tuesday, and Wednesday. Occasionally, when an especially long trial is scheduled (three to six months), special, larger jury pools are called in on Thursdays or Fridays. The larger pools anticipate more jurors asking for hardship exclusions.

Superior Court is looking at more efficiencies including an updated Jury Management System that could include text messaging.

Thanks, Greg, for inviting us to the Jury Room. If you would like us to walk in your shoes, please let Jamie know at jamie.holter@kingcounty.gov.